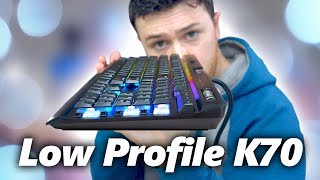 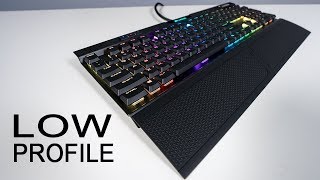 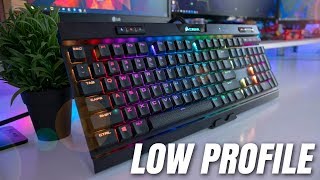 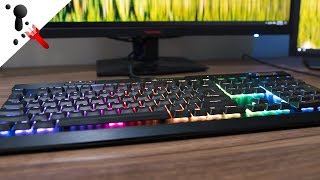 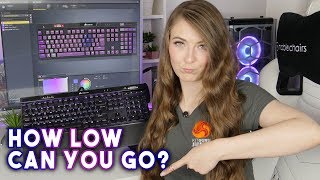 Great little mechanical RGB keyboard priced very well $80. What’s not to love. Speed switches perform perfect with little to no noise unless you bottom out the keys. I have bought several of these for my family and friends and at my job I have recommended this keyboard to many people.

I don’t know what happened to my keys, but the underside where it slips onto the switch mechanism is not sturdy and several are broken (see attachment).

It took me a bit to get used to the reduced travel but after a couple of days I’m really enjoying the compact design.

Since everything else on my build has RGB, why not! This is a good keyboard with a good feel for me, it maybe a bit expensive. I am happy with it though.

I have the Corsair K70 MK.2 SE keyboard as well and I think I prefer this. The keys are clicky feeling without being obnoxiously loud, everything registers perfectly, the LED’s are bright, vibrant and pop off the black metal frame. Feels like a keyboard that will last (especially seeing as I dont use it THAT much). I cant comment on how it performs gaming wise as im honeslty a controller guy, but it is a great practical feeling experience. Also love the slim keys. Little pricey but considering bulk of it is metal frame, and its corsair, I know quality is top notch.

The keyboard is easy to use. The keys are easy to press and spring right up. I am very happy with it.

Programmable keys, hotkeys, volume knob and multiple LED settings make for an excellent multi use board!

As someone who grew up with mechanical keyboards, I was eager to try one out. This particular piece from Corsair has been wonderful. The selectable backlighting is attractive, for sure; but the tactile feel of the keys is what sold me.

Each game I play I have to go into the icue software and set up the backlights. It’s a game changer.

Summary: I really like this keyboard, definitely the best keyboard I’ve ever had, but misses the mark on a few things that keep it from it being 5 stars.

For reference, I was coming from an old razer blackwidow stealth 2014 keyboard that I’ve had since 2014. That thing is gigantic and I had started to hate that thing more and more for a few reasons: how big it is in nearly all aspects (LxWxH dimensions & weight), and most importantly the keys and switches; I hated the super tall high profile keys and the super tall action and the loudness. I was making mistakes nonstop and it was annoyingly loud on top of all that.

I still wanted a full size mechanical keyboard but low profile was a must. RGB was not on my list of wants or needs to be honest. Wireless was a heavy want but not a necessity.

I found the K70 Mk2 and the G915 (wireless) but decided to go with K70 Mk2 because it was available in store right then (that’s how much I hated my razer keyboard).

PROS: (some of the pros that really stood out to me, not all)
– low profile keyboard is definitely low profile, from the chassis to the keys to the action; all low profile. I love it.
– chassis is top quality, feels and looks very good. The weight is perfect imo, not too heavy but also doesn’t slide around.
– I really like the open/raised key look
– all keys and buttons are actual keys, no rubber membrane type of keys for profile selector or anything like that you typically see for “non-essential” buttons
– very responsive from key presses to profile selection to volume adjustment. I really like the action of these switches. It’s not too loud either
– iCUE software and RGB lighting is way better than I was imagining it to be. I don’t really care about the A E S T H E T I C S that is always advertised and shown off by people but once I started checking it out, I realized how nice it is:
—- RGB lighting is very nicely implemented, it can be very bright or very dim depending on your configuration. It has a very nice backlight look, all RGB lighting is indirect light (you don’t see the actual LED directly unless you look under the caps).
—- The capability and customization that you can setup is far better than what I was expecting. You can set the colors of every single RGB light individually. You can configure some pretty complex custom lighting schemes that I never even really considers such as a single key going through custom set gradients over a custom time. The level at which you can customize the RGB lighting has implications of not only being just for aesthetics, but it can be used for specific states, notifications, etc.
—- Corsair provides iCUE SDK for custom functionality to be developed, I’ve already started looking into this for a couple things (see cons for why)

CONS: (some of the major misses for me that keep this from a 5 star keyboard)
– the volume adjuster above numpad is very responsive, there’s no lag between spin and windows adjusting volume. The problem is that it spins freely without any kind of notching as feedback for how much you are adjusting volume by. This results in me having to be very gentle and deliberate in adjusting volume by this roller since I usually only want to adjust volume by what should be by 1 – 3 “clicks” which is super hard to achieve without any kind of feedback so I have to slowly turn the adjuster while watching monitor to see how much I actually adjusted by. At this point, Fn + some key for volume adjustment would have been easier. Easy fix would for Corsair to notch the volume knob

– OK and now for the biggest con for me… The Caps Lock, Num Lock, and Scroll Lock status LEDs. These are the only lights that are not adjustable/configurable on the keyboard. Corsair decided to follow suit of every other company out there and pick the brightest, most intense white LEDs out there for indicating status. It is blindingly white in a dimly set room. I am forced to cover these status lights up with black electrical tape which ruins the look of this awesome keyboard, not to mention that I now can’t see the status of these keys (better than being blinded though). Even if I leave a tiny portion of the LED exposed from tape, the LED is so intense that the tiny amount of light making its way out still manages to assault my retinas. Also consider the fact that the LEDs are so bright in a dimly lit room that they wash out the symbol printed on the keyboard, so you need to know the order of lights to know what’s toggled on/off. I am currently looking into writing a custom function using the SDK to display status of these through the RGB lights beneath the keys while completely covering the status LEDs. For all the available functionality in iCUE, it does not provide the ability to check the state of these lock keys and map a color scheme to the actual RGB keys. iCUE should have this capability since the keyboard must already know the state to light up the status LEDs. Or allow these status LEDs to be customized in iCUE like every other light on the keyboard (even if just to dim them). Or not use such bright white LEDs or implement a diffuser so the light isn’t directly blasting me eyes

– macros can only be mapped to a single key, you cannot map a macro to a keystroke consisting of multiple keys. There are workarounds to get multiple keys trigger a macro but it requires making multiple profiles (e.g., in normal profile, map a key to switch to another profile where you map keys to your macro). Shouldn’t have to do this imo