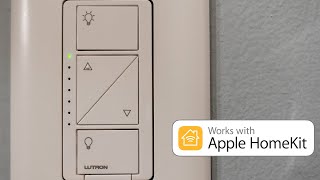 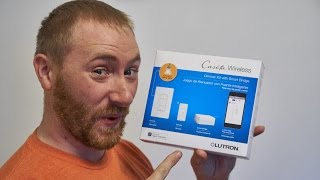 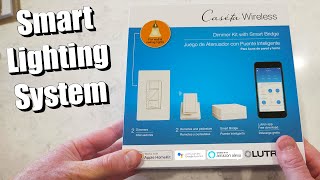 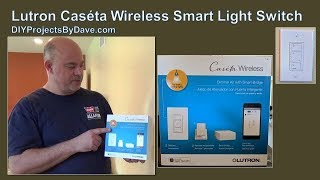 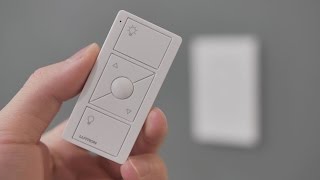 I used this to do a whole house. They worked perfectly. No problems at all.

Over the last couple of years I’ve been replacing many of our house light bulbs with Philips Hue smart light bulbs, and I’ve been mostly happy with them despite the high cost. Some rooms in my house have lights that are not compatible with smart bulbs, though, and I’ve struggled with what to do with those rooms.

My den is one of those rooms that I really wanted to be able to control by voice or remote control, but the room has a ceiling fan with small light bulb that doesn’t have a smart version. So when I came across someone’s post on the Internet about this Lutron Caseta wireless smart dimmer switch I was intrigued.

Even once I talked myself into buying this kit (I got it on sale), I didn’t install it immediately because I was nervous about trying to install a light switch. I watched a couple of youtube videos to help build my confidence, and it really didn’t look very hard, so I decided to give it a shot.

I was very careful, and I probably took a lot longer than I needed to because I wanted to make sure everything was right, but it has worked flawlessly!

I don’t really use the remote control (I did make sure it works), but using this switch I can control my den’s light through Alexa, exactly as I want. I installed it about 7 months ago and it’s been perfect! No problems whatsoever. At some point, probably when I notice just the switch on sale (since I won’t need another hub), I’ll probably do the same for another room in the house that also has a fan with light that isn’t compatible with smart bulbs. So yes, I’d buy again!

We love it as it does so much. as we have programed out door light to come on at dark and off at daylight

Not cheap but worth it. Love the wireless remote. Having the remote cut electrical wiring and labor installation cost.

We moved into an older home and I have been wanting to have the ability to turn on/off the lights in various rooms when we are not home or heading home. I researched tons of smart home products, even purchasing a few iDevice switches (very bulky and unable to fit into the older electrical boxes) because I did not want an additional hub device. We have long been in the Apple ecosystem, so we prefer items that are Homekit compatible. Why Homekit? Because the data isn’t stored on the cloud, isn’t sold, and must be encrypted per Apple standards. Using the Homekit app enables us to go through one app rather than 10.

The switches once installed and linked to the hub are incredibly easy to use as just normal dimmers with decently sized buttons so even grandma is happy. Setting preset dim levels is easy too, so most of the time it’s a single touch on, single touch off – already better than 99% of non-smart dimmer switches out there. Pricey – yes – but you get what you pay for. We bought this starter set to get the hub, and then separate switches.

The hub is easy – we have it downstairs with our router and it feeds all of the switches in the house. It’s quite small – a single Ethernet cable to the back of our router, and a small plug into the outlet.

The Lutron app is super simplistic, easy to use and has a great user interface. Setup via the app was unbelievably easy. There’s one kill switch at the top of the app screen that will turn off all Lutron-connected devices in that room at once – very handy when my kids leave lights on. Once the switch is connected to the app, it’s automatically in Homekit.
We will be adding more Lutron Casetas to other rooms soon!

These WiFi light switches are really simple to install and I love the app that allows us to turn the lights on and off from our phones.

It works as intended but would apprecaitento have some type of geek service to setup my lights instead of calling a electrician which cost waay over my budget to setup couple of lights.

This is a great product to incorporate into your smart home! This product fills in the gaps with smart switches if you do not have a neutral in your switch box. And the included hub is great to get it all connected.

Got this to use with Alexa and it works great. A little harder to install than I thought it would be but not terrible by any means.