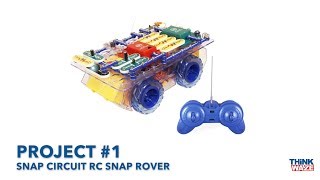 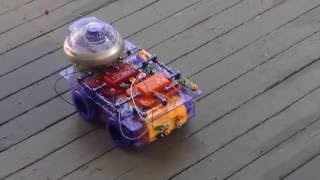 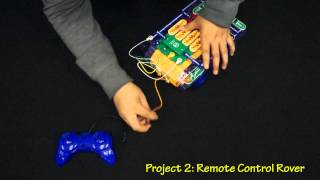 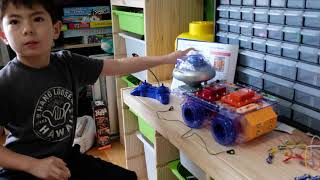 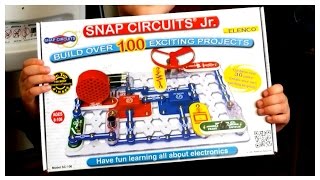 Bowen liked the Snapcircuits Arcade kit so much that there are days when he wakes up at 6:00am and asks to do projects. So when the Snapcircuits Rover went on sale during Black Friday my wife and I picked it up.The concept is fairly similar: you get a breadboard that’s mounted onto a chassis. The chassis contains the batteries, wheels, motors, but none of the electronics that you then wire together to put together a remote control vehicle. The remote is a simple flimsy remote that’s fixed function, by contrast.The problem with the rover, however, is that it’s of very limited variation. The wireless module and the control modules are two very big blocks that are connected by a bunch of resistors. In fact, as long as you want to receive signals from the controller and move the rover, you don’t have any choice but to wire up these two big blocks a certain way. The problem then is that you don’t have much space left on the breadboard for much else. Thus, the kit comes with 3 rover variations, and all the other projects basically treats the rover as a fixed unit supplying the power. Worse, the manual states that your other Snapcircuit kits (save a few exceptions) cannot be used on this circuit board because the voltage and power draws are different.If I were the designer of the system, I would have fused the wireless and control modules together into one block, eliminating the need to take up so much space on the board. Furthermore, I’d also include a voltage stepper so that the rover would be compatible with other Snapcircuit kits.As it is, the Rover sounds great, but is so limited that Bowen basically never played with it again after one night. I returned the toy to Amazon and he didn’t even notice!Not recommended.

This is a great toy if your child interested in circuitry. Otherwise, it is nothing special. There is an obvious problem with the remote control. Even when in close range, it quites sending executions to the Snap Rover. With some jiggling of the remote’s antenna fixes the problem for a time. This was a Christmas gift for a grandchild who lives many miles away. I hope that his dad can either correct the remote control problem or get in contact with the manufacture for resolve.

Really disappointing to have to return a Christmas gift for my son. I can say everything was easy enough for my son to understand and put together, however, the rover didn’t work properly. Sounds like others have had the same issue of the rover working for a very short time (seconds honestly) then stopping. There doesn’t seem to be a fix for this problem. We returned and bought him a different snap circuit kit. He loves them and generally has a better experience than this. Would not recommend this product.

BUYER BEWARE! THIS IS A DANGEROUS PRODUCT. Our first time using this, the motor overheated, started smoking, and melted a hole in the plastic casing. I contacted the manufacturer because there was an insert in the instruction manual the says “If you should encounter any problems or are missing parts, DO NOT RETURN TO THE RETAILER”…and then gives contact info for the manufacturer. The manufacturer is only willing to send me a replacement motor. I explained I do not want my children playing with this product and I want a refund. They are refusing me a refund and told me to contact the retailer.

I (and my 5-year-old son) love this Rover. We already had the basic kit and the advanced kit; this added a new dimension to it all. My 5-year old is very much into making circuits. Many mornings, I come downstairs, and he already has an exciting circuit to show me.WARNING: Many people (myself included) have experienced a dangerous burning out of the Motor Control unit (which included melting of the plastic). Lesson learned: Don’t leave the power on when the rover is not in use!!Fortunately, the company (Elenco) has amazing customer service. If a part is defective/broken, they will send you a replacement for free; they have been very good about that over the years.Snap Circuits sets are great for learning electronics. I am a college physics professor, and I actually use them in my first-year physics class for teaching electronics.

This was supposed to be my son’s main Christmas present. Out of the box it didn’t work. The company sent us a new remote because the casing on ours was cracked so we thought that would be the problem. It wasn’t. So over a week after Christmas, still no rover! So I ordered another one. With Prime it came quickly and it worked! But it only worked for 1 day. Now it will not work. My son is sad, I’m annoyed at the time and money wasted. We have loved our other snap circuit kits, but this one is not worth the money! Hopefully we can get our money back for both of them.

My kids have used several different snap circuits sets, and most of the time they are an extremely popular toy in our house! For this reason, we purchased the snap circuit Rover for my 6 year olds main Christmas present. It was very disappointing, when upon opening the box, we found that the antenna on the remote had been broken off and taped back on with electrical tape. There was also a thick plastic component that had been shattered into several pieces and repackaged. I paid full price for a “new” item that was clearly used and broken. Very disappointed! We will be returning it, but it does not alleviate the disappointment of my son on Christmas morning! Like I said, typically we are pleased with snap circuits, but this was an extremely disappointing situation! I am not sure how it happened.

Did not work. We have two other snap circuits sets that we have never had a problem with. This was a disappointment.

My son had the regular set of snap circuits and loves them. He saw this rover and instantly wanted it. He got it for his birthday and has built and rebuilt it many times. Everything works perfectly, he drives is all over the house, and I love that he can do this on his own or we can do it together. The only downside is that when he reverses it, it makes an annoying beeping.

My son is already a huge fan of snap-circuit kits and this rover set did not disappoint. As with all the snap circuit toys the quality is excellent and the projects are both challenging and fun.If you are able to keep all the pieces together there are enough projects in the included book to keep even an expert snap-circuit builder busy for weeks if not months. My son still plays with all his kits, but the rover is certainly his favorite.