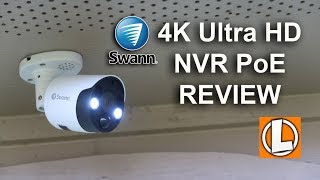 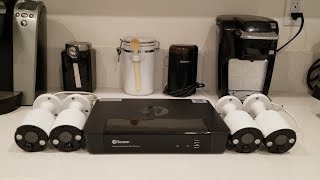 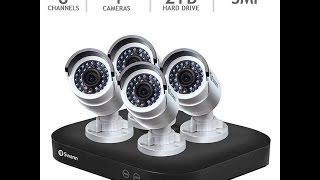 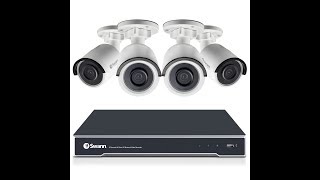 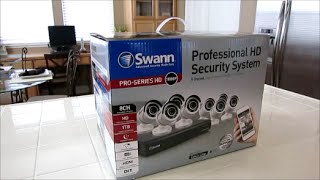 This system does not require the Internet, which is a huge plus. After an easy setup, you will be set to record from the cameras and view a real-time feed of them on a monitor. For most people, the Internet will be needed, which requires an Ethernet connection. The bad part about that is that it will need to be next to your router if your home is not wired or you don’t want to buy an extra access point. In turn, this means you won’t be able to view the feed on your living room or bedroom TV, which would be very convenient for checking on noises or knocks on the door.Video quality is 4K, but I don’t think it is in focus enough to matter over 1080p. There doesn’t seem to be a good enough video source feed from the cameras for it to keep that level of detail anyway. Regardless, video is good in various lighting conditions and I think significantly better than the typical wireless cameras.The app is pretty terrible at this point. Alerts don’t work for me at all, even when I leave it running in the background as suggested, which destroys my battery. For just viewing the live feeds, it does work most of the time. Basically, it feels like a very early version that needs some iterations. I wanted a local network Windows app to have a feed running on my computer’s second screen, just to keep an eye on things as I work, but that doesn’t seem to exist. I tried to use the old Swann software for this, which did not seem compatible.If you just want a local security system, this is a very nice one to go with. The DVR functionality has been reliable and using the system on a monitor is straightforward. For anything else, it is just okay.

The quality on these are AMAZING! Easy to install and I like that you can view all cameras at the same time. Motion sensor senses EVERY LITTLE THING, just keep that in mind! Night vision is crisp as regular day time & it catches everything in HD which is amazing! Also works well under any weather condition with Chicago weather I haven’t had a problem with the cold rain and random snow days!

These are some of the most clear security cam pictures I have seen. Usually, when I would try to see detail on my old cameras it was hazy at best. On these cameras the picture is very clear and gives great detail even at night time. Now just so you know this is a completely wired system so unless you have an attic or crawl space wiring could prove difficult. Each camera has 60 feet of cable so running through walls and around corners could be a problem but if you have an attic space, like us, then straight runs are no issue. The DVR does NOT have WiFi built in so you either need to connect it to your existing routers open ethernet port or use a stand alone WiFi extender that has a wired connection port. If you are planning to connect the DVR to your home network. Overall, the instructions are very clear and the installation was easy to accomplish. This is defiantly a high-end style camera system at a very good price point. If you want to add more cameras there are 4 additional video ports on the DVR.

Excellent cameras ! I Prefer them because I can monitor everything through my cellphone .Here are some of the features that really impressed me!Monitor your property with 4 camerasAlso includes DVR, power adapter, security stickers, mounting hardware and screws.Set and forget with hard drive storageRecord continuously from 8 channels with a 2TB hard drive.High-resolution technology captures superior footageCameras use advanced image sensors to record larger, clearer full-screen video. They produce an image that is 3840 horizontal and 2160 vertical pixels in size.Infrared night vision lets you see in the darkKeep an eye on things up to 98′ away when there’s little to no light.Viewing angle up to 90°Expertly captures a wide angle of your property for exceptional security at all times.Works with Google Assistant and Amazon AlexaFor easy voice operations.HDMI and VGA outputsConnect to a wide range of compatible displays for versatile viewing, including your HDTV, LCD or plasma TV. USB connectivity makes it easy to transfer stored footage.

Basic installation, good for the price. My third system from this company and they only get better. Have replaced the others just as upgrades.

I had someone professionally set this up so it would be correctly done (I’m not the greatest with electronical hookups). It’s been operating great with no problems. I don’t think the night vision quality is as good as it should be. Other than that I think it’s great.

The picture quality is excellent on this in my opinion. I find it very easy to see who or what is at my house. I love that it is constantly recording. Being in the country I find it a little scary to be home alone at night. This definitely makes me feel more comfortable. When I hear a noise I can just check and see what it is; the night vision cameras work very well. Installation was not fun however. We have a crawl space attic and routing the cords through the ceiling and back outside was a bit of a pain. But for one day of discomfort we have the dependability of a hard wired system. I like this much better then the wireless system we did have. I don’t love the app though. I’m hoping there will be some upcoming improvements there.

I had bought the dvr8-5580. Amazon deliver was on point. As for the product, first impression was, it was all plastic; cheaply constructed, but i wasnt especting something in the wow department anyway. Assembly was simple, plug and play. Video quality was ok for 4k, my samsung 1080p smartthing wasnt that off from it. Now, why this was given a 2 star. First off, unit was a dvr with spotlight deterrent and siren. Once turned on and updated, firmware does not support deterrent, meaning no spotlight or siren detected. Rendered the spotlight on the camera useless, turns out im not the only with this issue. Call support, was told i need a level 2 techinically for a another firmware update. Was then told to wait for a call back between 2-3 hrs. Never happened. If your in the market for a 4k system, better off with the nvr version 8805. I choose the dvr one because of my existing setup which had the bnc wire ran already. Next was the fan noise, no idea why swann would use such a loud fan to cool off the system, for a 40x10mm fan its loud. Constant humming, if you ever had a computer back in 1999 thats what it would sound like all day and all night. As for the app, simple set up, easy to navigate. Down side is its laggy. Mainstream on your phone is clear but choppy, substream is a little smoother in movement but blurry is quality. Samsung smartthing thing is horrible but even it performed a little better. Overall, i wouldnt recommand this unit as of right now.

I think the sensitivity of the cameras could be better.

Capture subjects in high resolution for easier identification with this Swann eight-camera eight-channel 4K security system. The 2TB HDD offers ample space for storing hours of footage, while a loud siren can be manually or automatically triggered when activity is detected to deter potential intruders. This Swann eight-camera eight-channel 4K security system features a weatherproof design that lets you monitor the outdoors all year round.