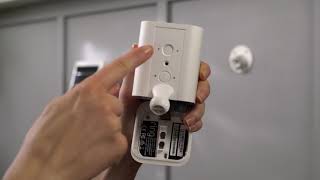 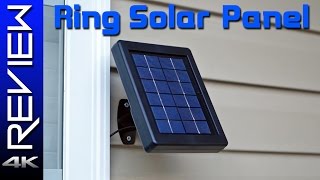 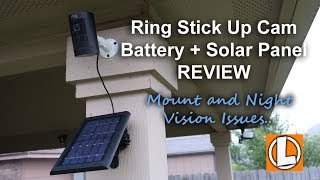 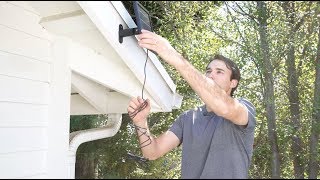 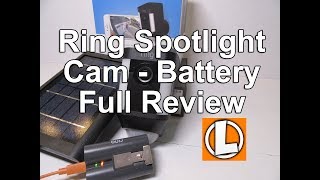 This solar panel does a great job. It was not as expensive as the Ring brand but still does an excellent job of keep the battery for my Ring Spotlight Camera charged.

I not longer have to climb up and change the battery. It is a much better investment than buying a second battery for the camera.

I purchase 3 of these panels. They work fine however if you need anything don’t even bother with them as far as customer service. I dropped and lost several of the tiny o-ring they provide for the connection to the ring cam. So I contacted them think they could just put a few of them in an envelope and send them to me. Nope not even if a would be willing to pay for them. If a company cannot afford to send a customer that purchases 3 of their panels a few two cent o-rings then forget about any major issue with the panels later. You are better off spending the few extra dollar and buying a ring panel. At least they know how to take care of their customers!

I wanted a Ring camera to monitor a side of the house but didn’t have any good wired power source. Decided to go with a Ring spotlight battery camera and mount it high up in a tree (15ft up) for a better vantage point and for security of the camera itself. Found that after a few days of having it mounted on the tree facing the house, the battery was down to about ~80%. Got a second battery, but didn’t relish the idea of having to go up and down a ladder every few weeks to charge the batteries, so decided to try this aftermarket solar panel.The solar panel keeps both ring spotlight batteries at 100%. Even with heavy traffic, linked recording, HDR, etc, one battery has not dropped past 90% throughout the day and other battery isn’t even used and remains at 100% constantly. At dusk after the afternoon sun has shone on that side of tree where I have the solar panel mounted, both batteries are back up to 100%.The solar panel is now positioned in direct sunlight, but even when I had it originally in indirect sun it seemed to still charge the batteries although not enough to keep both batteries at 100%.The cable is 4 meters/13.1 ft long. I didn’t initially know how far away I would need to position the solar panel from the camera, turned out only needed a foot and a half, so just simply ziptied the bundle and hid it behind the panel. Used a staple gun to make sure the cable stayed flat against the tree.Hoping this solar panel remains reliable, but so far very happy with this purchase.***UPDATE***Should have foreseen this, but a few months after installing this in a tree, I noticed that the solar panel was no longer charging the batteries in the Ring spotlight. Went up the tree to investigate and found the wire to the back of the panel had been chewed through, probably by a squirrel.Took the panel down, soldered the connections back together, and put thick shrink wrap over the solder joint. Encased the wire in 1/2″ plastic loom wrap that you can pick up in any automotive section. Has been back up for a few months since the repair and so far the squirrels have left it alone and panel is back to charging batteries.

Works well with my cam would buy again in the future

My Ring Stick Up Battery Camera is mounted on a roof over-hang thus battery change is inconvenient. After putting up the camera I was seeing the battery discharge at about a steady 3% a day. I installed the solar panel, not in optimal direct sunlight. The solar panel is in a lot of tree shade and gets some direct sun from about 1:00 PM until sundown, still very shady. Since installation the battery discharge went to zero for two very cloudy days and then started increasing on a partially sunny day. I am looking for some real sunny days to measure the charging. The entire unit is made of plastic so it should be handles cautiously. The mounting bracket uses only two provided screws for mounting. The mounting bracket will rotate 360 degrees. The solar panel slides onto the mounting bracket and the panel will elevate up and down. The solar panel power cord is permanently fixed to the back of the solar panel and the other end has a power connector that attaches to the back of the Ring Stick Up Camera. I think the cord is about 13 feet long. Important, you need to remove the three piece gasket on the Ring Camera power connector or the solar panel connector will not make a good electrical connection to the camera. You will know if you have a good connection if the two screws on the power connector tighten the connector into the body of the camera. If the screws are wiggly or easy to turn you didn’t do it right. In general, it probably was less than a 30 minute install. The most difficult task was finding an area that the home owners association wouldn’t complain about the panel. The panel is very small and easy to conceal.

My camera battery was nearly dead when this arrived and I installed it and it completely charged the battery. Works great!

I’ve had both the Wasserstein & Ring solar panels. The adapter to the spotlight camera fit better on the Ring panel and can rotate to best fit various installed positions. The Wasserstein screws are a bit too short so the adapter does stay in place, plus it can only be positioned either up or down.

I should post this to my youtube channel but what would I say? Plugs into the camera and if set to face the sun it works perfect? I will say tech support was cool, they replied to all my emails and even though at first they were quick to write me like I was a simple minded person and didn’t know to remove the only rubber piece blocking the port on the Back of the ring camera! Once they realized I had a brain we connected well and they explained that the battery had to be a full charge before plugging in solar panel. BUT however I didn’t fully charge the battery and guess what? It took a few days but did charge the 2 batteries on the ring spotlight cam after all to a full charge and has been working perfect ever since..

It keeps my camera charged with no problem.

Mounting it was easy, just 2 screws. The one in the rear of my house is where I have an issue with the mount. It won’t twist around enough to get the most sun possible. It still charges the camera but it doesn’t get direct sunlight.